There are four main varieties of Muscat a petit grains  (Muscat with small grains) in the world, the main difference being the color of the berry: white, pink, red and black, the last three being considered clonal variations of the first variety.

There are a couple of grape varieties in Romania said to be synonyms of the above mentioned different Muscats from the group. Thus, we have the Tămâioasă românească (white), Tămâioasă roză (pink) and the Busuioacă de Bohotin variety. This latter variety is classified either in the category of pink varieties, red or black, although it is neither one nor the others, but purple!!!

Let’s identify the Romanian synonyms of the varieties in the Muscat a petits grains group. 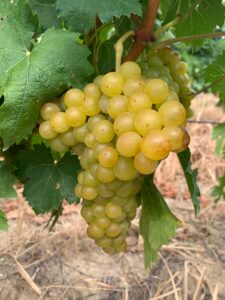 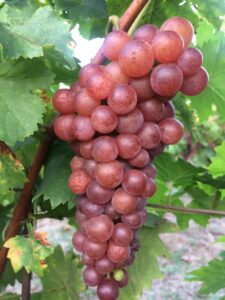 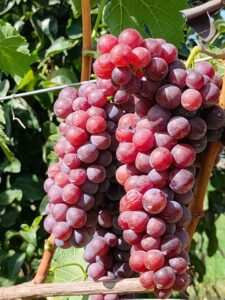 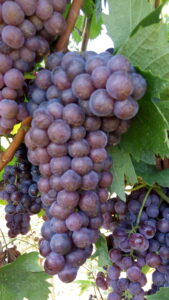 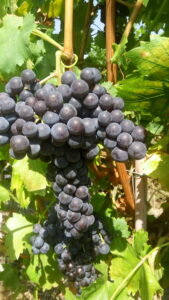 So, at first glance, one might find a connection with the varieties in the Muscat à petits grains varietal group.

There is a true “Tower of Babel” situation with these synonyms. Unfortunately, some of them are common for more than one variety, others include a different color than the real one. This can even confuse specialists, not only wine enthusiasts.

Romanian specialized literature has identified this variety either as Tămâioasă, or under the Busuioacă name. Nicoleanu mentioned that the name Tămâioasă was mainly found in Muntenia, Oltenia and Moldova, while the name Busuioacă was used in Moldova. He also wrote that this variety was found under three forms: white, red, and black[1]. Druțu mentioned that the name Busuioacă was used exclusively in Moldova, while Tămâioasă in the other regions of the country[2].

There are different opinions on the origin of this variety: either it was brought from ancient Greece together with the Tămâioasa românească, or its origin is from Bohotin. A 2017 study shows that, on one hand, the SSR profile matches that of the Muscat à petits grains blancs, and on the other hand, the red color of the berries and the ampelographic description indicate a similarity to Muscat a petits grains rouges. The conclusion was that Busuioaca de Bohotin was the red somatic mutation of Muscat à petits grains blancs. It should also be noted that in the same study Constantinescu´s claim that this variety corresponds to Muscat rouge de Madère was disproved[3].

José Vouillamoz launched another hypothesis one year later, that Busuioaca de Bohotin is not a pink mutation of Muscat à petits grains blancs, but a distinct variety.

The first mention of the existence of the Busuioaca variety in the Romanian space belongs to Bogdan-Petriceicu Hasdeu who discovered it in 1874 at the mansion of Prince Mihail Sturdza.

Following a linguistic survey[4] conducted between 1884 and 1892 under the guidance of the same Hasdeu, the grape variety was identified in several locations in Moldova. Nicolae Densuşianu subsequently confirmed this[5].

It has always been considered as a highly esteemed, luxury variety, both as table grape and as a wine grape producing the so-called “tămâioasă” wine.[6]

The one who really „rediscovered” this variety was Constantin Hogaş, director of the Huşi School of Viticulture from 1918 to 1937. Here’s the history of this event.[7]

During the autumn of 1925 he began a thorough investigation at the wine institute of Falciu County together with Petre Chirică, the head of the viticulture department of the same school. They stayed at a attendant, I. Hagiu overnight, in the village of Bohotin – Moşna commune and he served them a wine made from this variety for dinner. The intriguing wine provided them a special impression, sparking curiosity about the variety that had sourced it.

The next day, on demand of Professor Hogaş, they moved to his old vineyard in the northern part of the village of Bohotin, on a southern exposure slope at the foot of the hill. The vineyard was old, indigenous, with un-grafted vines and umbrella-shaped pruning system. Most of the varieties planted were Zghihară, Fetească albă and Busuioacă, with scattered vines of Frâncușă, Plăvaie, Coarne, etc.

At one point they were attracted by a few vines exposing aubergine-purple bunches. The owner explained they came from the cuttings (“cârligele”) brought from the former garden of Mihail Sturdza (Prince of Moldova in 1834-1849 period), from Bohotin, but he didn´t know what it was called exactly, except for the Busuioacă nickname.

Going to the former garden, located over the hill and eastwards from Moşna, they came across the attendant who recommended them to speak to N. Mocanu, the head of the local school. He explained that the vineyard, orchard, greenhouse, vegetable garden and watering pipes were the work of a gardener. Amongst other things, he also dealt with breeding and promoting new vines, trees, and flowers. It was in his garden that they also found, along with other vines, the purple Busuioacă they were looking for. The gardener boasted with great satisfaction about the pinkish grapes pretending they were bred by himself. For these reasons, he initially named the Busuioacă vânătă variety “of Bohotin”.

The quest continued the following days in the old vineyards of some wealthier owners in Huşi (Herşcovici, Tiron, Neaga) where this variety was present in quite a large proportion (15-20%).

During the same autumn, grapes and cuttings were taken for analysis and grafting and placed in the ampelographic collection under the name  Busuioacă vânătă de Bohotin-Huși.

The first description of this grape dates back to 1926[8] along with other varieties that were planted in the ampelographic collection of the Huşi School of Viticulture.

For almost 40 years the variety has remained only in ampelographic collections and in scattered crops. 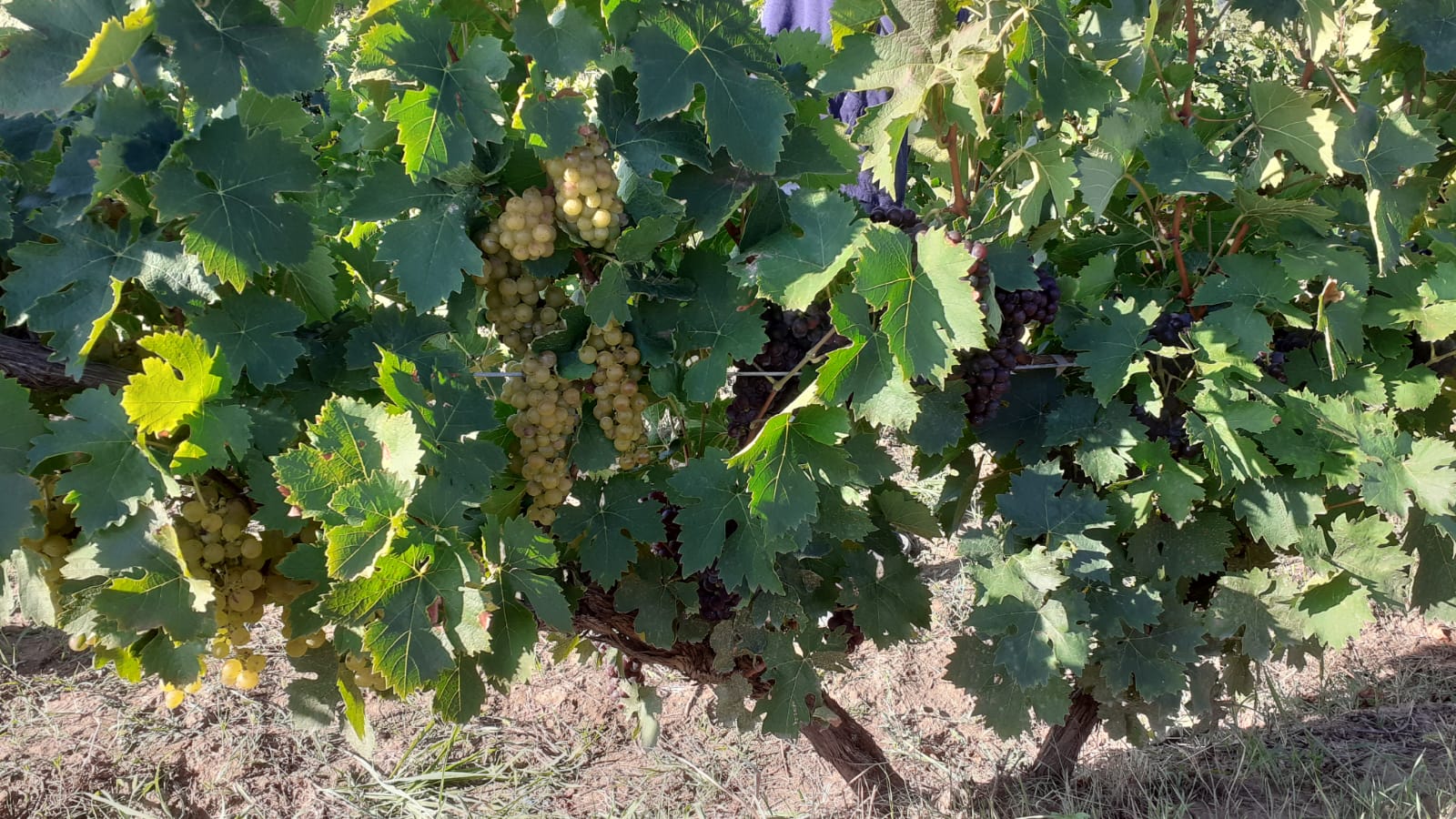 In 1964, Professor Avram D. Tudosie accompanied by several graduates and students of the Huşi Wine School identified and marked the Busuioacă vines from old vineyards in Huşi and the surrounding area. In the autumn, when the grapes ripened, he found that around 3-4% of the vines had aubergine- purple bunches, in 2-3% of the cases the grapes were pink (Busuioacă roză) and 1-2% of the vines had a mix of purple, pink and white grapes.

Harvest was done separately according to the colour of the resulting grapes, and the respective cuttings were grafted to CAP Corni on 0,25 ha for each selected variety.

The first wine production in 1964 was of a mere 15-16 liters!!! The experimental results led to the spread of the areas cultivated with this variety. Thus, the school had 0.35 ha, IAS Bohotin 100 ha, IVV Olteneşti 20 ha and another 5 ha were to be found at the Perieni Institute.

– this variety has the same affinity for clonal variations as the Muscat à petits blancs, Pinot noir and other varieties. In this case, these new varieties could be called Busuioacă albă, Busuioacă roză și Busuioacă vânătă.

The name of the variety comes from the smell and taste of basil (Ocimum basilicum), an aromatic plant.

There are 605,51 ha of Busuioaca de Bohotin in Romania: 273,42 ha in the Iasi department, 225,99 ha in Vaslui as well as 72,26 ha in Buzau and 21,06 ha in Prahova. Besides some others scattered hectares, these are the two important poles for the grape variety: the northern area of Moldovan Hills region-Iași/Vaslui and going North-eastern from Dealu Mare with the Pietroasele area in Buzau and spots in Prahova department, in the Dealu Mare DOC itself. It can be mainly labelled as Cotnari, Bohotin, Husi, Iași DOC in the Moldovan Hills and Pietroasa or Dealu Mare DOC in Muntenia, although some other DOCs in Moldova include it in their regulations (Cotesti DOC for instance). PGIs such as Dealurile Vrancei or Dealurile Moldovei also label it.

Even though Muscat grapes have low acidities, wines didn´t lack freshness, and the alcohol degrees stayed mastered. What is distinctive with Busuioaca de Bohotin is its palish pink-orange colour with coppery glints, which in these cases was mostly respected. It can get on the salmon-pink, pomelo-like or peachy-pink, but it is difficult to obtain girly pinkish shades such as raspberry, redcurrant, cherry. Its musky aromas are also specific- Busuioaca name comes from “busuioc” meaning “basil” in Romanian. Besides classic roses and tropical scents, it has that distinctive terpenic shiso-Thai basil aromas, and also desiccated basil blossom specifically known in Romania from the orthodox culture (priests benedict places and people by sprinkling them with a bunch of dried basil dipped into holy water). The third sought after characteristic is represented by the phenolic compounds that are classically present with Busuioaca more than other rosés and even other muscats. These phenolics are important to counterbalance diminished acidities and sometimes, some elevated alcohol levels. So, the idea is to balance the aromas with the texture, without losing too much acidity (already very smooth with muscats), harmonize the freshness of the nose with the fresh feeling on the palate without pointing the phenolics too much so that they become bitter and also have a digest degree of alcohol.

Short but consistent flight. Happy to have shared it with Bruno Scavo, Elizabeth Gabay MW and BenBernheim as fellow jurors, in Carros -Nice and other international judges around Europe.